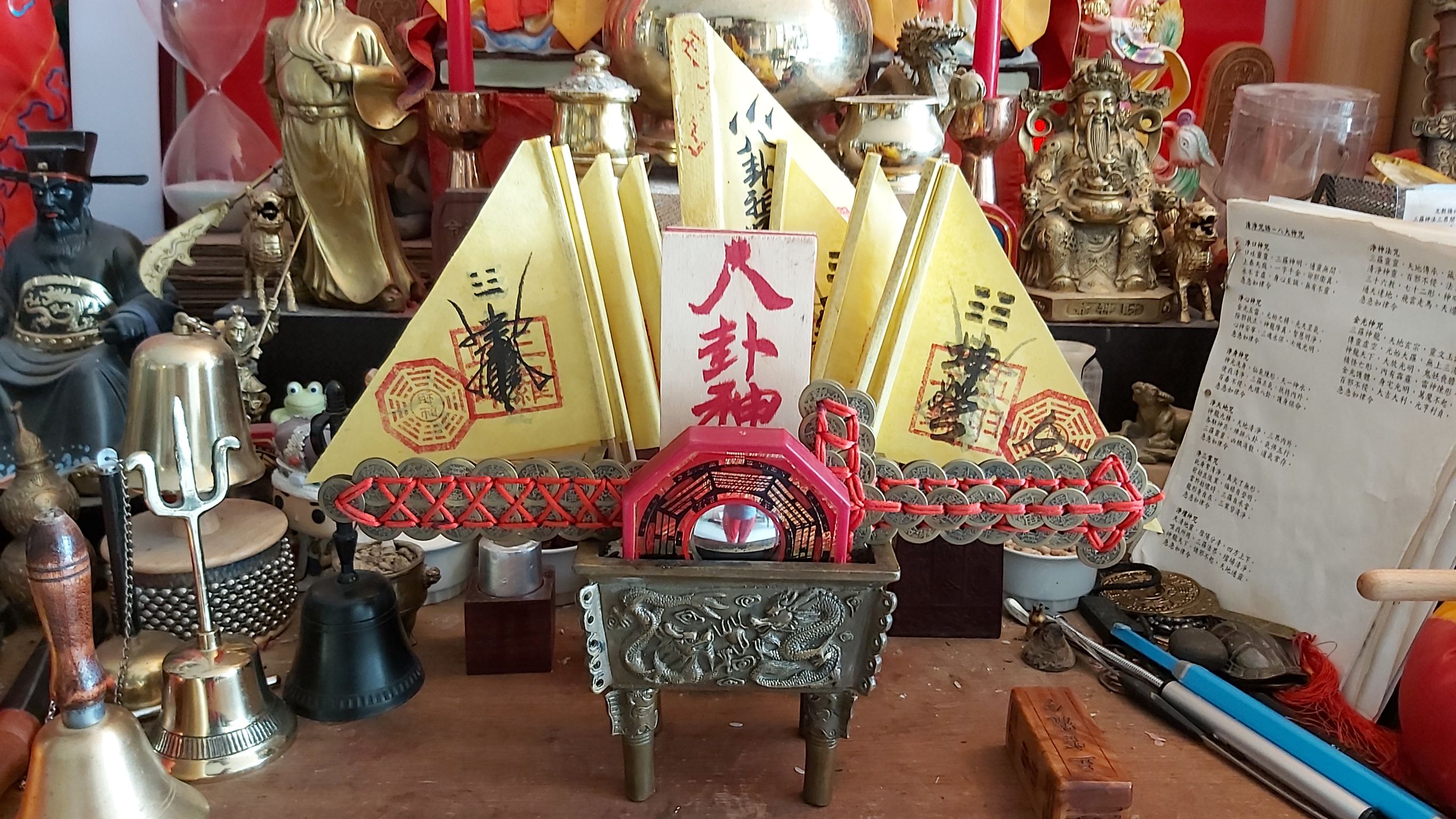 The Bagwa Jo Si, which we have explained in the earlier article, is basically the main power of the altar and his job is to help us bring the pre-heaven powers from the celestial court into this world, and store the power in the altar system. Bagwa Jo Si also acts like Google or YouTube; it searches for the resources you want, and grabs it over for you to use. Bagwa Jo Si himself is powerful, but wait until you learn about the 8 armies in the Bagwa department, then you can command each of the armies to help you on certain things, strategically arranging them to help out on specific duties.

KIN, DUI, LEI, JUNN, SHUN, HUM, GUN, KWUN – Memorize this in order first. This is the spell of the pre-heaven Bagwa, and that’s how the order goes, from phase 1 to 8, and this is also the name of the army. We will now refer to them as ARMY, so you can get to know their duties better from another perspective.

Imagine the Bagwa Jo Si is like a Marshall in the frontline, and 8 Generals are under him. The headquarter (the King’s place) has all the resources and people, and now they are going to prepare for war.

KIN CAMP – They are responsible for the connecting to HQ. This camp signals to HQ and lets HQ see them, and also gives signals to REQUEST help. Keeping connected with the HQ is the main job, as it ensures you do not lose your powerline.

DUI CAMP – They are the scouters, and also the ears for the army, because their job is to search and find where the resources are. HQ answers them, and they have to tell the HQ what is needed here in the frontline.

LEI CAMP – They are the decision maker who say YES this is what is needed. If this department doesn’t approve, then DUI will have to search again for the right elements. Once this camp approves, the transaction begins.

JUNN CAMP – They are the department who puts the resources DOWN to the HQ and marks what is needed. Just like buying things, you put down the money to mark it as yours. JUNN will be responsible for holding onto the resources needed by putting down the payment or marking the items.

SHUN CAMP – This camp will transport things back to the Bagwa army main camp, and basically bring things towards the camp site. They are like the pick-up truck department.

HUM CAMP – This camp is responsible to make space and open up areas in the Bagwa army camp for the resources to come in. Just like how boxes arrive at a warehouse, they are the ones to empty out spaces and make way for the shipment to be placed in.

GUN CAMP – This camp is the people who take care of the accumulating, stacking, inventory, and keeping resources inside the Bagwa army, kind of like those inventory workers in a warehouse who deal with organizing things all day long.

KWUN CAMP – This camp is the department who sends the troops and resources to work, and deploys them to the ground-department for actual duty. When this camp says GO, then the army has to go to work.

Once the army gets into the Post-heaven Bagwa army, then the department works like this:

KIN CAMP – They are the department that keeps a connection with the pre-heaven Bagwa camp, so that they can see each other.

GUN CAMP – They will basically bring the new comers in and put things into storage, keep people into their rooms and so on, stockpile up things that came in.

JUNN CAMP – This will be the camp that gives out orders and puts the army’s power onto the people, for them to have a job and also the right power and tools to do the job.

SHUN CAMP – This department pushes the people selected towards their place to do work, like a transportation team that transports the soldiers to their work location or field.

LEI CAMP – This department holds the power to make decision, give command to START the work and make sure work is being done right.

KWUN CAMP – This department will deploy the troops and power to do their work and lets them exist the Bagwa army camp to actually do their job.

DUI CAMP – This department is going to listen for order from the above again, since everything is done and clearly listed above. They will listen and look out for anything coming your way again.

Basically, their duties are about the same, just in a different order when they work. That’s the Bagwa Army, which consists of 8 camps with 8 generals. Every camp has their duty. With the Bagwa army magic, we can communicate with one or several specific army camp(s) and tell them what we need. For example:

We need to tell the DUI CAMP to find opportunities for the troops to do work.

We can find the LEI CAMP, to make the right decision for the army later.

We need to boost the KIN CAMP, as enemy is trying to distract us from connecting to our own HQ.

The application of the Bagwa army is very complex and interesting, it can allow the person working at the altar to manipulate the powers within the system and turn the situation around by making the right changes or boost.